How To Remove A Public Record From Your Credit Report 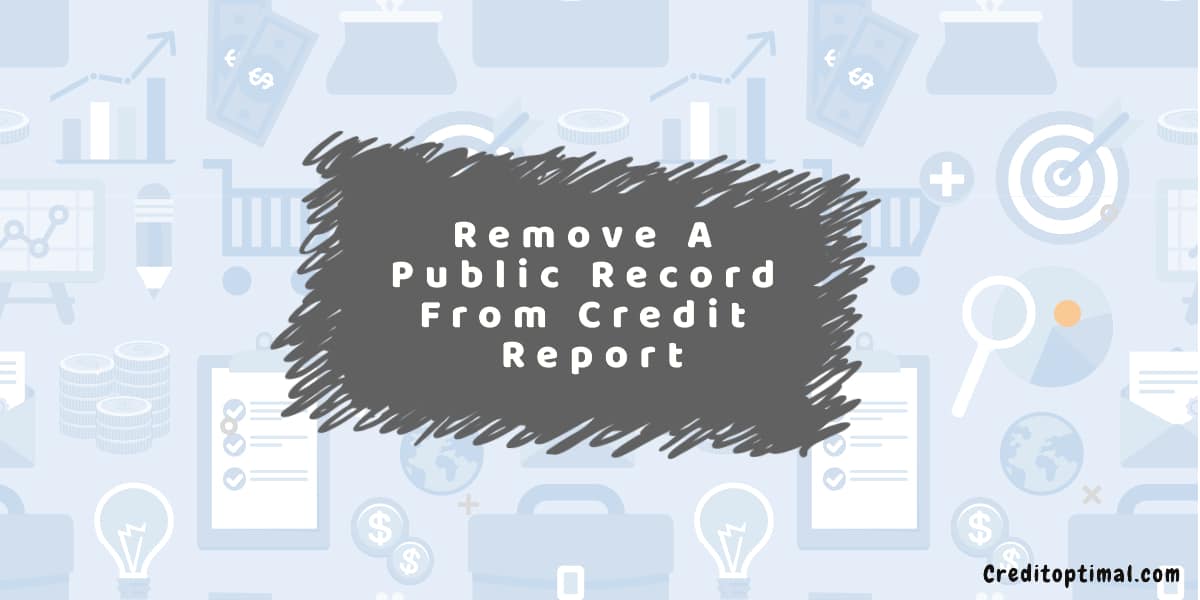 Your credit report is a representation of how you use your finances. It reflects how you pay your bills, manage your debt, or have several impending loans.

In your credit report, there is a section reserved for public records, which are primarily entries filed by your local states, county, or federal courts.

A few years ago, three records could be included in your credit report. However, things have changed recently, and the list has grown quite long.

Essentially, if your creditor sues you for severe delinquency and the court rules against you, you'll find that entry in the public record. In some cases, you may find such listings included in your credit report.

Even if you clear the debt, the public record can stay in your report for over a decade. According to a study by the FTC, at least 20% of consumers had a mistake in their report.

Before 2015, public records were of three categories.

If someone or a company involves a court due to some defaulted payment and you lost the case, the entry would be included in your report as a public record. Your landlord may sue you, your car may get involved in an accident, and you fail to pay for damages or someone whom you borrowed money might sue you.

Primarily, the three public records included bankruptcies, judgments, and tax liens. However, some states allowed repossessions and foreclosures to appear in your report as public records. In such cases, they show severe delinquencies and are the worst types of public records.

If you were experiencing foreclosure, you might have had to consider the probability of a short sale where you sell your house for a lesser amount than what you owe, consequently avoiding the foreclosure.

Some banks would prefer this short sale since they find it better to recover at least some of their money rather than no money. Besides, selling the house for a lower price meant the transfer of home ownership, and it would still end in the bank's records.

Records that won't appear on your credit report

After 2015, the three credit reporting agencies – Equifax, TransUnion, and Experian – entered an agreement with the NCAP and attorney generals in more than 30 states. Among the settlements they agreed upon, they decided to alter their thresholds for what they would report as public records.

The data centers only include entries that emanate from a debt, which means items like income tax, probate records, welfare benefits, and divorces won't be included in your report.

As of 1st July 2017, any public record on your report should include your name, address, SSN, and birth date before the data centers include it.

When this agreement took effect, the bureaus excluded civil judgments and tax aliens – which means that if you noticed a surge in your score, it could have been because of this reason.

While excluding tax liens, judgments, or foreclosures might be a relief; you might have a cause for worry since these records might be detrimental for your mortgage application.

By April 2018, federal law explicitly states that bankruptcies were the only entries that could appear on your credit report.

Impact of a public record on your credit score

Public records could plague your report for almost ten years.

If you've recently filed for bankruptcy, it might lower your credit by as much as 200 points.

Since potential loan issuers perceive you as a high-risk borrower, bankruptcy would be a red flag as it tells your creditors that you can't keep your financial obligations.

Since court records are continually updated, a discharged bankruptcy would undoubtedly be removed from your report by a representative, credit bureau, or by the courts.

How are public records different from other report items?

There is a huge disparity between public records and other credit elements and how they are added to your report.

With most accounts like credit cards and car loans, the loan issuer sends data to the credit bureaus when you open an account.

After sending the information, the lender will continually update your balance and payment history at the end of every month. Consequently, the bureaus will update your credit report with the new information.

Keep in mind that credit reporting entirely depends on the responsible parties; no law specifically requires you to report the information. Similarly, no law binds the credit bureaus by forcing them to add information to your credit report.

However, loan issuers and credit reporting agencies must obey the FCRA regulations if they choose to add any information to your credit report.

Public records, on the other hand, work differently from the usual credit report entries. No creditor sends information to the credit data centers. Instead, the agencies continually add data from public records to the reports without any reference to any data furnisher.

While you're the only one who can check the elements in your credit report, public records are available to everyone.

How To Remove A Public Record From Credit Report

The preliminary step is to avoid any bankruptcy, debt, lien, or foreclosure.

If you have a financial issue that might involve a court, you should try and solve it. Pay the debt before your creditor seeks court assistance to merit their allegations.

Another way to remove public records is by looking for mistakes in your report. The file can show a pending debt, even if you've cleared it. If the owner decides to dispute the issue with you in a court of law, you might have a ruling against you, consequently making the public record have authentic information.

If you truly paid the debt, it should be recorded as paid. You might involve a credit repair company or a debt collection company to report the correct information so that your public record is rectified.

In the case of old public records, they automatically fall off after seven years. Financial institutions and lenders aren't interested in old items since they tend to focus more on red flags in the recent past.

With a bankruptcy or a foreclosure, you might need to consider a legal representative to guide you through the hoops of removing them.

Since bankruptcies can stay in your report for seven to ten years, it might be cumbersome to remove them from your report. Besides, if you fail to fulfill the provisions provided by a court after filing for bankruptcy, it would certainly reflect on your report as a public record.

With judgments, you can use a credit repair company to remove it. Once you pay the debt as ruled by the court, the public record will appear to be paid, and this would raise your credit score.

However, the loan issuer or bank might consider you a red flag, especially if it's a recent judgment.

To ensure maximum efficacy, you'll need to involve the credit collection agency hired to collect the money. This is because the FCRA act requires debt collectors to validate a debt and the individual they're pursuing.

You may write more than three letters in such a situation, but the good news is that you'll eventually get the information you needed and be confirmed as the actual debtor who has cleared their debt.

Since you've cleared the debt and the collection agency is satisfied, they would report it to the credit bureaus that would consequently delete the public record.

What if I have some mistakes in my report?

If you believe the public record was added to your report without enough justification, you might dispute the mistake using certified mail or phone.

Since you can get a free report each year from the three credit data centers, you can use this provision to check for any errors, after which you dispute with the respective bureau.

To build a solid case, you should attach relevant documentation to the claim. The bureau will contact the court, asking them to verify the entry, then notify you of their findings and verdict.

Since bankruptcies largely determine whether a public record is in your credit report, you should exclusively focus on removing them to reduce your score's impact.

If you've filed for bankruptcy, and you fail to remove it from your report, there are still viable ways to fix and improve your credit.

You can commit yourself to clear all bills, build a positive history with your creditors, or apply for a secured card.

The impact of deleting public records

Your credit report should have information that showcases all your payment history and credit habits.

If you have outstanding debt, the amount should show on your credit report, consequently making the credit reporting agencies review your score accordingly.

In some scenarios, you might see some paid debts documented as public records, but not all of them. Here, the most probable cause would be legal disputes that require you to pay some money, and not a traditional loan.

Since it is a judgment against you, you'll have to pay the money you owe or hold in contempt of court.

According to the FCRA, you have a right to accurate information; thus, public records can't be displayed on credit reports without sufficient justification.

If you find that a public record is unfairly in your credit report, you should engage a credit repair company since the process has a lot of legal complexities and could take up to a year of follow-up.

Besides, most courts take time to respond since their response systems are automated, and such challenges may prolong the process.

In summary, deleting public records from your report would have an immediate impact on your score. Although your score might surge substantially, you might need to be more patient for it to reach where it was initially.

Public reports would undoubtedly hurt your credit score to a great extent.

However, as the report gets old, the impact it has on your score plummets.

Since bankruptcy is one of the worst indications that you have bad financial habits, it would be great to avoid them at all costs.

In some cases, bankruptcy may be the break you need, but the red flag that it shows your potential creditors might not be suitable for your fiscal health. You might be denied favorable interest rates, and your negotiating power would dwindle significantly because of these public records.

While the three credit bureaus continuously take steps to help you minimize mistakes on your credit report, you should check your report often to ensure it's flawless.

Overall, make timely payments and maintain low debt levels to lessen the severity of such occurrences in your report.

Article written by Robert Ferry
We are an unbiased knowledge center for finance and our goal is to help you make your own, educated decisions about getting your credit life turned around.

Credit Optimal is an unbiased knowledge center and our goal is to help you make your own, educated decisions to getting your credit life turned around.
Copyright © 2023 Creditoptimal.com
PrivacyTermsDisclosureContact